Now that you mention it, it wasn't really the night before Christmas and we weren't in a house. In fact there were many creatures stirring (mostly human, I think) and I didn't see any stockings hung anywhere, there not being a chimney nearby. Be that as it may…

We had a wonderful Christmas play put on by the children of the parish, shortly after the end of Mass last week. Here in Shanghai, many of the foreigners in the international parish make plans to visit their home countries during the Christmas holiday, so our celebrations are pushed forward on the calendar to a time before people start to leave. Here's a collage from one of our “staff photographers” showing the little angels all dressed up like little angels. 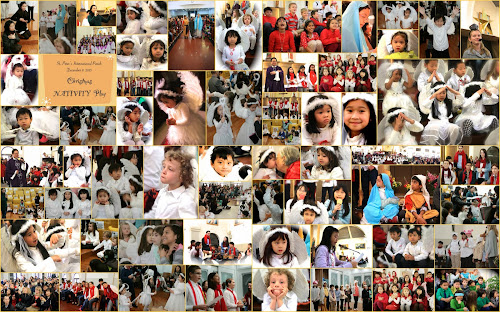 Later that day, the parish met to celebrate a potluck luncheon and enjoy some caroling. We served about two hundred or so and enjoyed ourselves immensely. The caroling was great fun, and the food was delicious. But the best part was seeing the parishioners come together…many different faces from many parts of the world. Being an American, it made me think of home. 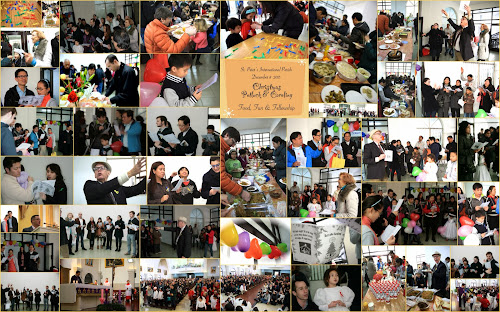 So, even though it's still a little early, Merry Christmas!

I am married to a Chinese national, and I myself am an American citizen. The Church we attend for weekly Mass varies; some Sundays it’s the local Chinese Catholic Church here in town, other times we travel back into Shanghai proper and attend an English Mass at St. Peter’s International. It will be interesting to compare the liturgy in the one celebration with that of the other.

Already we notice that the homilies differ in scope: the international parish homilies talk more about behavior in general, explaining the underlying meanings found in the Gospel that day, while the local Chinese Catholic Mass has a sermon more closely tied to the behavior of the parishioners. I guess that’s to be expected. In the next several weeks, we are going to try to attend two Masses each weekend — his and hers — to compare notes. It’s going to be enlightening to see what differences exist.

ZENIT – Some Questions Regarding the Leshan Ordination

ZENIT – Some Questions Regarding the Leshan Ordination.

Sadly, this news from the Vatican:

VATICAN CITY, 16 JUL 2011 (VIS) – At midday today the Holy See released an English-language declaration regarding the episcopal ordination of Fr. Joseph Huang Bingzhang, which took place on Thursday 14 July in the diocese of Shantou (Province of Guangdong, Mainland China).

“1. Fr. Joseph Huang Bingzhang, having been ordained without papal mandate and hence illicitly, has incurred the sanctions laid down by canon 1382 of the Code of Canon Law. Consequently, the Holy See does not recognise him as bishop of the diocese of Shantou, and he lacks authority to govern the Catholic community of the diocese.

“Fr. Huang Bingzhang had been informed some time ago that he could not be approved by the Holy See as an episcopal candidate, inasmuch as the diocese of Shantou already has a legitimate bishop; Fr. Huang had been asked on numerous occasions not to accept episcopal ordination.

“2. From various sources the Holy See had knowledge of the fact that some bishops, contacted by the civil authorities, had expressed their unwillingness to take part in an illicit ordination and also offered various forms of resistance, yet were reportedly obliged to take part in the ordination.

“With regard to this resistance, it should be noted that it is meritorious before God and calls for appreciation on the part of the whole Church. Equal appreciation is also due to those priests, consecrated persons and members of the faithful who have defended their pastors, accompanying them by their prayers at this difficult time and sharing in their deep suffering.

“3. The Holy See reaffirms the right of Chinese Catholics to be able to act freely, following their consciences and remaining faithful to the Successor of Peter and in communion with the universal Church.

“The Holy Father, having learned of these events, once again deplores the manner in which the Church in China is being treated and hopes that the present difficulties can be overcome as soon as possible”.
OP/ VIS 20110718 (330)